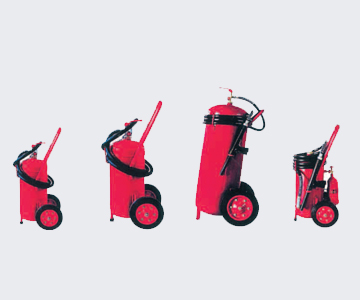 Mobile FOAM Fire Extinguisher stored pressure modles and mechanical foam model have the following characteristics. AFFF Aqueous Film Forming Foam is an extinguisher, suppressing fires almost as quickly as powder. In addition FOAM seal the burning surface against re-ignition, it is intended for use mainly against fires in petrol, oil and other liquids but is highly effective with other ordinary fires. In extinguishing, the FOAM is partly broken down and gives off a thin film spreading over the burning surface and preventing further release of the burning gases. The film in self-heading i.e. if it is damaged in any way, new film will quickly float out and cover the fuel surface again. The FOAM will there-fore give exceptionally good protection against re-ignition which means increased safety for the operator.

Fire Ring Fire Services (Pvt) Ltd. is a company specialized in the service and manufacture of a wide range of Fire Extinguishers. FIRE RING was incorporated with a keen desire to provide the total support package and most comprehensive and reliable fire protection solutions to protect lives and properties.